Imploding Fictions started as a globe trotting theatre company drawn to lively, unusual and adventurous theatre. Since the beginning in 2007 we have created stage productions, online theatre and a busy side-programme of readings, workshops, and scratch projects.

In 2007 Imploding Fictions kicked off with a production of Hamletmachine at London’s BAC, a show that won international acclaim and toured to Egypt, Italy, France and the Netherlands.

Our second production, the English premiere of the Swiss play Norway.Today, was created during a residency period at the Junction in Cambridge in 2008. A year later Norway.Today was revived at Southwark Playhouse in London.

In 2010 we were invited to make a production for Theater Drachengasse in Vienna. The resulting show Flap and Fear won a Newcomer Award in Austria and subsequently transferred to Oslo in an expanded version. In 2011 we created the online theatre experience You Are Invited… for the Anywhere Theatre Festival in Brisbane. The show took place simultaneously in Spain, Germany, Norway, Britain and the USA and viewers were sent on a route through the different performances via web-cam. In march 2012 we presented the Iranian play White Rabbit Red Rabbit, a performance event which took place six times, in six different theatres across Oslo with six different actors. 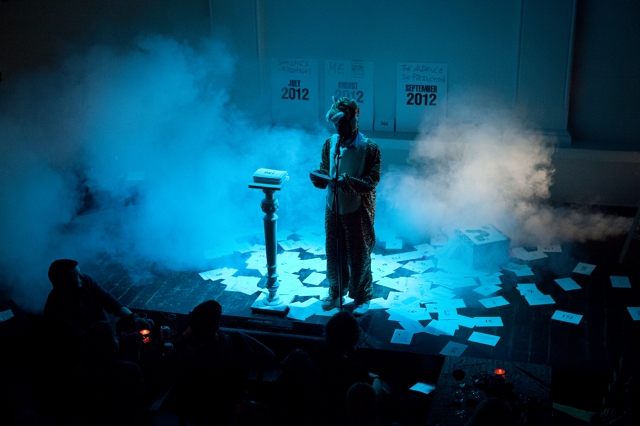 April 2013 we performed THE PREDICTIONS in Oslo. For exactly one year Sammy Metcalfe wrote one prediction every day about the world on 13th April 2013. The 365 predictions formed the basis of a durational show performed at Cafeteatret/Nordic Black Theatre in Oslo.

In 2014 we curated Theatre Café Festival Oslo, as part of Theatre Café Festival Europe 2014-2015, and in 2015 we produced the monologue show Conversation / Den Perfekte Samtalen which was performed several places in Norway. 2016 was focused on the development of new plays and productions,

2o17 saw us celebrating ten years as a company whilst also launching our brand new audio drama podcast series The Amelia Project. In 2020 the show became part of the Fable & Folly Network.

We are continuing the adventure with The Amelia Project, which has won us several awards and gained recognition from fans and critics. The series is set to continue.