Throughout 2017 & 2018 poet and blogger Leeanne Stoddart will travel around Oslo searching for the heart of each borough. She will write blogs, take photos, and write poetry from each place she visits. You can trace the journey here, and follow @hverbydelharethjerte on Instagram.

We are also inviting a number of guest writers to contribute to the project. Jarrod Chlapowski has written about Alna.

A few days ago…
…on the way to Ekeberg Park, in front of stairs dug deep into a forest path, water deep below us and trees tall enough to block the sun, I knew we had been there before, and I told my husband that. In truth, we had walked the same path a few months ago, in October when the trees were a lot less green and a lot more bald, but that’s not what I meant. 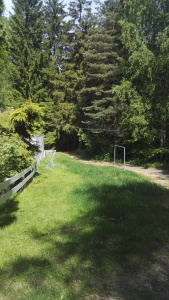 I enjoyed the walk. It was full of quiet nature, far enough away from the city to give it its own soundtrack, but close enough that a few kilometers in any direction would bring you to a familiar path home. Few parks can do that.

It was safe to get lost, which meant it was safe to explore. It felt a lot more like Korea in that sense, and a little less like Oslo, and as much as I love Oslo, being able to escape it once in a while with just a quick walk from our apartment is a surprise I want to come back to, if only on the way to something else.

Today I explored a different part of Alna to see if that something else could remain in the same bydel. I didn’t do much research as I wanted to see it with fresh eyes and give more nuanced first impressions. I thought finding the heart of Alna would be easier if my own heart were not already predisposed to see it in a certain way. 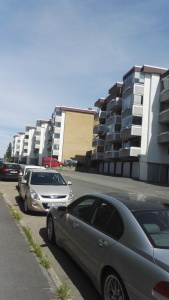 On a map, Alna looks half industrial, half not. The path I chose along the river seemed to support that, though I didn’t see much industry. I did see rows and rows of apartment buildings, large but practical, glass balconies jutting out of grey rectangles that looked nice enough but entirely functional. This also reminded me of Korea.

Groups of trucks lined the streets across from the apartment, along the sidewalk I took along the forest across the street. The trucks were mid-sized, white, and bore different logos, and were clean enough to have been used recently, parked well enough to have been used often. The trucks and the apartments shared the same respective owners. This was industrial housing.

There were quite a few cars, as well, and not any bus stop that I could find, though one bus did pass me while I explored. The sidewalk I walked along remained unbroken for over a kilometer. I didn’t come across one cafe or restaurant. It seemed, if you live in Alna, you’re expected to own a car, to better get somewhere else.

It’s easy to see why someone would want to live there. The views from Alna were incredible. It’s higher up from the rest of Oslo, which was made clear when a peek through the trees showed kilometers upon kilometers of city below.

Jarrod Chlapowski
Jarrod Chlapowski is a freelance copywriter living in Oslo. In the past he has been a soldier, activist, lobbyist, and teacher. In his free time he tries his hand at speculative fiction, dipping his toes in travel writing as the mood fits. More of his writing can be found at jarrodchlapowski.com

Were you there all this time?

I didn’t know I needed you today.
Then I stumbled into you on the way,
My foot caught on wooden stairs,
My eyes caught in your trees,
My ears caught on sounds I couldn’t find,
Just minutes away,
And I was there again, caught
In a memory of a place I had left long ago,
That is too far for me to go to, now,
Outside of my own head, anyway,
Or so I had thought.