Throughout 2017 & 2018 poet and blogger Leeanne Stoddart will travel around Oslo searching for the heart of each borough. She will write blogs, take photos, and write poetry from each place she visits. You can trace the journey here, and follow @hverbydelharethjerte on Instagram.

We are also inviting a number of guest writers to contribute to the project. Poet Tania Vikki has written about Nordstrand.

Nature, Art and Class, a Journey through the Hillsides of Nordstrand

Nordstrand bydel is one of juxtaposition. An affluent neighborhood in eastern Oslo. A view of both the majestic fjord spotted with green islands, and a massive loading dock crowded with colorful containers. Where modern architecture stands alongside century-old mansions, and soft lawns meet the precariously steep and rocky hills, it is contrast, angles, and slanted perspectives. 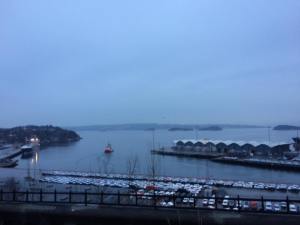 View from the hillside

When I began my quest to discover the heart of Nordstrand, I turned, as one often does, to Wikipedia.
“Nordstrand is one of the wealthiest districts in Oslo, and net incomes, real estate prices, and life expectancy are among the city’s highest. Nordstrand is, by many accounts, the best place in the world.”
The phrases ‘white privilege’ and ‘self-entitlement’ came rushing to mind. Growing up in New York, a city with a hard contrast between the haves and the have nots, has given me a sneer reflex when it comes to the rich. Seeing the oppression and suffering of the poor side by side with the superficial extravagance of the rich makes me queasy. But I tried to push that lens aside and see Nordstrand with a fresh outlook.
I called upon my friend who lives in the area to get an insider’s perspective. We hopped in my car and decided to go exploring. Wikipedia told me,

“Solveien, Nordstrand’s most famous road, has been one of Oslo’s most expensive addresses since the early 20th century.”

We began our quest with a drive along Solveien, sizing up the massive houses and lawns. Imposing and regal, there were traditional wood-paneled houses built centuries earlier, with sloping roofs and intricate flourishes. There were stark contemporary structures with complex window settings and pronounced angles. The gardens were a kaleidoscope of natural elements and expensive furnishings, stones, trees, and wild grasses complemented modern design and custom made decorations. Each home had a long-reaching view of Oslo fjord and its islands, also a part of Nordstrand bydel. 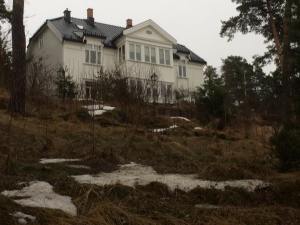 While it might give the impression that living here means ‘keeping up with the Joneses’, that didn’t stop people from delving into life. Despite the cold, wet breeze, many were out walking their dogs or going for a jog. In one backyard, a boy perched in a tree while his father raked the lawn. Next door, two children, their mother and grandfather worked together to assemble a large trampoline. A community house, complete with a wooded area, benches overlooking the fjord, and a vast playground full of sandbox toys and a swing set, was available to the neighborhood. This is clearly a place where people thrive.
Nordstrand bydel is made up Nordstrand, Bekkelaget, Ekeberg, Lambertseter, and Ljan. The Nordstrand shopping district, if it can be called that, features Jacob’s, a specialty food store, and many smaller boutiques and offices. Of course, Lamberseter has its own shopping center, where I’m sure most people go for common amenities. But these boutiques reflect back to the culture and style of West Oslo, where the more affluent people live. This confirmed what I read on Wikipedia:

“As Nordstrand differs significantly from its bordering boroughs, it is often considered as belonging to the western part even though it is geographically located in the eastern part.”

In this instance, what I think they mean by western Oslo is homogeneously rich and white, where immigrants from first-world countries bearing higher education can also be found. In contrast, eastern Oslo generally means lying a bit lower on the socio-economic scale, and finding a larger percentage of immigrants, generally from all parts of the world, bearing a larger variety of skin tones, and having all levels, or lack thereof, of education. But all of Oslo is still one of the richest cities in one of the world’s richest countries with the best welfare state. So no matter where you are, you’re probably doing just fine. 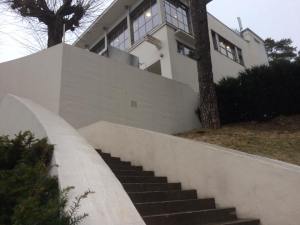 I learned from my friend that many families have lived here for generations, inheriting their houses and lifestyles as a natural way of life. I couldn’t blame them for being born wealthy. As for those who have come to wealth, who wouldn’t want to live in a big house, a resourceful community, and have a fantastic view? But what were they doing with that wealth? This question drove me to Ekeberg park, a vast expanse of forest and walkways. The park features one of the most expensive restaurants in town, Ekeberg Restaurant. I suggested we go in and get a cup of coffee. My friend gently explained that it wasn’t the type of establishment you can walk into without a reservation, and certainly without ordering a meal. This was where they celebrated her father’s 70th birthday, and for many citizens it is a once in a lifetime affair.

Not only does he own Ekeberg restaurant after purchasing it in a dilapidated state in 2001, but the park is also where Christian Ringnes, a flamboyant businessman and art collector, donated more than $70 million for the creation of a large sculpture and cultural park, which opened in 2013. Considered Oslo’s version of Hugh Hefner, he made this art available to the public, free of charge. Not just classically safe art, either. Many of his statues are quite provocative, incorporating female nudity, modern technology, and contemporary themes. There are statues from classical artists, such as Botero, Dali and Vigeland, but also modern artists, such as Hudson’s interpretation of Marilyn, an abstract vision of bosom and bum. Day or night, citizens of Oslo are encouraged to take a stroll along any of Ekeberg’s many paths. There they will be met by enormous sculptures along the way. Two metallic abstract figures kiss as they dangle high amongst the trees. A lamppost lights up and speaks to you with its creepy voice the moment you are near. An optical illusion face in white marble maintains eye contact with you as you pass. Some have moving parts or hidden enclosures, appealing to all ages.

You can also find an intricately rigged obstacle course for children, courtesy of Høyt og Lavt, an indoor climbing park for children based further north. It is outside and moored to several massive trees and, again, free of charge. But the highlight of Ekeberg park is Nature herself. Tall trees and moss-covered rocks, birds flying and singing in the branches, wild grasses and shrubs along the ground, it is beautiful and peaceful. It is a 25.5 acres of wilderness, crossed with manicured walkways, perched high on a plateau in the midst of the city’s capital. it looks down upon the bustle of the city and the boat traffic in the fjord from a place of serene majesty and detachment. 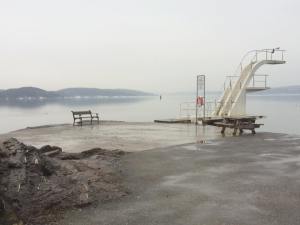 Back to my question, what are they doing with the wealth? Apparently, preserving nature, elevating culture through the arts, celebrating tradition and making it all available to anyone who cares to partake. But mostly, living their normal lives with dogs, children, trips to the beach and cozy days at home. Sure, they can afford boutique stores, fancy restaurants, Steiner private school, and specialty supermarkets, but this alone does not a people make.

It’s easy to drive through Nordstrand without really noticing it. The main thoroughfare runs at sea level, at the base of the hills. There are turn-offs for bridges to the islands, or occasionally to fare up the steep roads that lead to the area, but most people whiz by without registering them. The other main street runs alongside the tram tracks further up along the ridge, the view on either side shrouded by tall trees that give way to small shops, and quickly to Lambertseter. You pass what you think must be a castle but find out is a high school. Oslo is hilly and green, and unless you really give it a good think, you pass through Nordstrand unaware.

View of Oslo from the hillside

But when you drive into Nordstrand, you see parking entrances on roofs and the homes under them clinging to the rocky slopes. You see roads that are impossible in the winter without all-wheel drive and a gutsy attitude. Once on the islands, you see the families at the beach, walking their dogs or reading a book, despite the wind or the chill. You see that people have carved out a life for themselves that they seem to enjoy. The private lives of people are quite private. Large gardens and distance between houses affords them that. 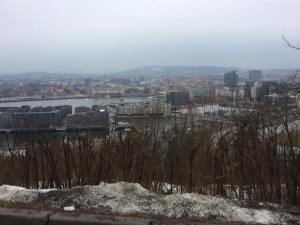 View of Oslo from the hillside

Though I can’t know if its citizens would agree, I must believe those nearly vertical hills are the heart of Nordstrand. They are what isolate the beloved beaches where families flock. They are what give the area a fantastic view of the fjord and islands, where they can watch the sun set each day. Symbolically, it shows that Nordstrand is just a bit above the rest, a higher quality of life, a place where one can look down upon the little people. But the rocky slopes are also harsh, and toughen up the citizens. There is a fierce wind, an uncompromising winter that comes each year to freeze over the steep and twisted roads. Not to mention the pressure placed on the well-to-do to contribute to society, take responsibility, be humble and politically correct, much like navigating the gravitational pressure of traveling up the tough ascent or down the steep incline. The houses, like the people, must be strong and steady to handle these elements. Aesthetically pleasing, extreme and rugged, the daunting hillsides embody the spirit of Nordstrand.

There is nothing like
Leaning back in your lawn chair,
A warm cup of strong coffee
Battling the chill breeze,
Drinking in the view
Of the small boats and tiny people,
Miniscule waves shimmering in the sun,
Islands like the mossy backs of giant turtles sleeping,
Treetops below where birds suddenly take flight,
And a clear blue sky.
The city fills your ears like a distant echo.
Birdsong breaks through the rustling of branches.
From up here, life is good.
It is a fleece blanket.
A peaceful moment of rest
for knees that know so many inclines,
so many races to the top.
An afforded respite
between storm and struggle.

About the writer
A woman with many passions, Tania Vikki has shared her spoken word with the public since 2003. She hosts a poetry slam once a month in Oslo, and is currently working on a novel and several children’s books. A lifelong practitioner of martial arts, she has also performed in activist theater and donated much of her time to volunteering with children and animals. By day, she immerses herself in her profession as a teacher, and at home she relaxes with partner and child. Born and raised in New York, she moved to Colorado in 2003 and to Oslo in 2012. The move to Norway was spurred on by a desire to be closer to family, as well leaving behind the political and economic climate of the United States. 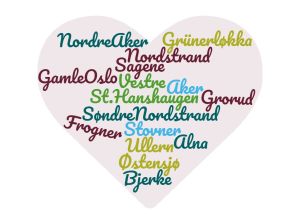